In an effort to tackle the devastating impact of climate change on rural hunger and poverty, the French development agency, Agence Française de Développement (AFD), today signed a €300 million loan to the UN’s International Fund for Agricultural Development (IFAD) to help small-scale farmers in high-risk countries build their resilience to shocks and increase their productivity.

“If we want a world without hunger and poverty we have to focus our attention on the most vulnerable places where the poorest people live – and this is in rural areas,” said Gilbert F. Houngbo, President of IFAD, the UN agency dedicated to eradicating rural poverty and hunger.

“This loan demonstrates France’s strong commitment to investing in rural people, as well as the role of IFAD in assembling development finance to fight  climate change in line with the Paris Agreement.”

Estimates show that climate change could push 100 million people into poverty by 2030, with those working in agriculture suffering most. This is likely to result in more hungry people. Almost 690 million people went hungry in 2019 – up by nearly 60 million compared to five years ago. COVID-19 could increase that number by an additional 135 million by the end of this year, with poverty expected to increase for the first time in decades.

This sovereign loan from AFD aims to reverse these trends. The funds will be used to help rural small-scale farmers to increase their productivity, better manage scarce natural resources, access new markets and financial services, and build their resilience to a changing climate. 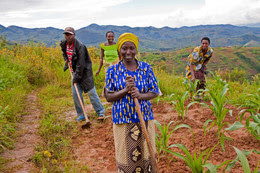 As these farmers grow 50 percent of global food calories, these investments have a significant impact on the world’s food supplies.

AFD has collaborated with IFAD on various activities, including strengthening agricultural and weather risk management, co-financing projects in Cuba and Angola and building the capacities of African farmers’ organizations.

AFD has contributed UD$ 292 million to IFAD since the creation of the Fund, and previously provided it with a loan of €200 million.

IFAD invests in rural people, empowering them to reduce poverty, increase food security, improve nutrition and strengthen resilience. Since 1978, we have provided US$22.4 billion in grants and low-interest loans to projects that have reached an estimated 512 million people. IFAD is an international financial institution and a United Nations specialized agency based in Rome – the United Nations food and agriculture hub.

The Agence française de développement Group (AFD) is a public institution that implements France’s policy in the areas of development and international solidarity: climate, biodiversity, peace, education, town planning, health, governance, etc. Our teams are actively involved in more than 4,000 projects with a high social and environmental impact in the French Overseas Departments and Territories and in 115 countries.  We thus contribute to the commitment of France and the French people to the Sustainable Development Goals (SDGs)

When Is The Best Time To Start A Business?

BE THE FIRST TO KNOW ABOUT US